This is the first Alberto Giacometti retrospective to be held in Spain in more than 20 years, and it will bring together 198 artworks in the Palacio de Buenavista. The 20 photographs and 166 of the other works are from the collections of the Fondation Alberto et Annette Giacometti, in Paris, created by the artist’s widow.

The Museo Picasso Málaga presents Alberto Giacometti. A Retrospective, an exhibition that precisely reflects the different stages in the career of one of the outstanding artists of the last century. Giacometti&rsquo";“s work is crucial to understanding the development of the avant-gardes and the subsequent evolution of contemporary art, while as an artist he nevertheless defies classification. This project challenges the conventional reductionist view of Giacometti&rsquo”;"s oeuvre.

This is the first Alberto Giacometti retrospective to be held in Spain in more than 20 years, and it will bring together 198 artworks in the Palacio de Buenavista. The 20 photographs and 166 of the other works are from the collections of the Fondation Alberto et Annette Giacometti, in Paris, created by the artist’s widow. The show is completed by three works by Gioacommetti that are on loan from private collections and from the Zurich Kunsthaus, along with a work by José Ruiz Blasco and a selection of eight works by Pablo Picasso from private collections, the MPM&rsquo";"s own permanent collection and the Fundación Picasso Casa Natal.

The activities that have been scheduled to take place alongside this exhibition include workshops, jointly organized with ONCE, that involve six resin copies of sculptures by Alberto Giacometti";" a seminar that will examine the subject of Architects, Film-makers and Artists in their Studios";" a series of talks to be held in Malaga and Paris on The Artist&rsquo";“s Studio”;" guided tours of the exhibition for adults and schoolchildren, and workshops for school group during term-time and for children in general during the Christmas holidays.

ALBERTO GIACOMETTI With his exhibition of Alberto Giacometti (Borgonovo, Switzerland, 1901 - Chur, Switzerland, 1966), the Museo Picasso Málaga presents the work of a key figure in twentieth-century art and a contemporary of Pablo Picasso, with whom he coincided in Paris, although, though the Swiss artist was a generation younger. Despite the evident aesthetic and existential differences that characterize their work and their attitudes, there are significant points in common in the two artists&rsquo";" careers, such as being sons of artists, their academic training, their move to Paris during their youth from peripheral countries to the artistic centre of the time, and their shared interest in the Old Masters.

The exhibition also addresses other key facets of Giacometti&rsquo";“s life and work, such as his obsession with inventing new modes of representation by stripping traditional genres such as the portrait, the still-life, the human figure and landscape down to the barest minimum. The show also explores his belief in the existence of a reality beyond the realm of appearances, as evidenced by his brief foray into Surrealism &ndash”;" a reality he perceived as being in constant flux and transformation.

The 169 works by Giacometti brought together for this exhibition, which include oil paintings, sculptures, drawings, prints, furniture and textiles, and the 20 photographs by other artists documenting the artist at work, are grouped in different sections and arranged chronologically to show the successive stages of his aesthetic evolution: the earliest works, his arrival in Paris and first exposure to non-academic influences, his interest in late Cubism, his artistic relationship with creative talents such as Picasso and Cézanne, the notion of the cage as delimited space and the human as an artistic genre, among other topics. Alongside them are displayed a small selection of works by Pablo Picasso that illustrate the common features of both artists, as described above.

It should be pointed out that twenty of the works that have been brought to Malaga - amongst them two oil paintings - have never before been on loan from the Fondation Alberto et Annette Giacometti for exhibition purposes. This is therefore the first time they have been on show. Also on display is an interactive digital version of a 1932 sketchbook of Giacometti&rsquo";“s drawings that reveals the Swiss artist&rsquo”;"s explicit interest in a group of works by Pablo Picasso that are specific in terms of period and form.

A JOURNEY THROUGH HIS WORK A painter, sculptor, draftsman, printmaker, creator of decorative objects and writer, Giacometti never ceased to explore new artistic paths. The exhibition as a whole bears witness to his disturbing and wonderful world and the coherence of his aesthetic position.

Alberto Giacometti. A Retrospective begins with works from the family setting of his early years, and the first portraits and anatomical studies. One of the key sections of the exhibition traces the artist&rsquo";“s development from his arrival in Paris in 1922 and his attempts to engage as a sculptor with late Cubism in the second half of the twenties and the early thirties and with the tenets of Surrealism, from his first contacts with Jean Cocteau and André Masson in 1929 through to his admission into André Breton&rsquo”;"s circle in 1931.

During the thirties Giacometti devoted a part of his energies to applied arts, designing and making furniture and decorative objects, a number of examples of which are included in the show. This line of work gave added impetus to his experimentation and his sculptural exploration of a new idea of place, with an aesthetic far removed now from Cubism and Surrealism. He now set himself to question the value of abstract art as a credible vision of reality, and in engaging with and reworking the traditional genres made a unique contribution to the history of twentieth century art.

During the second half of the thirties, after he was expelled from the surrealist group, he began to focus on the relation between figure and pedestal, on the expression of architectural and spatial qualities, highlighting the work of art as the nucleus that facilitates the experience of place. One of the most innovative departures here is the affirmation of the value of real movement in sculpture.

From 1946 on, are the stretched and elongated threadlike figures sculpted in bronze that inhabit a space shared with the viewer. These are complemented by a series of oil paintings in which the representation of the protagonists strips them of subjectivity in order to endow them with objective intensity and luminosity. For Giacometti, sculpture was of interest to the extent that it embodied his vision of the outside world. The exhibition concludes with the impressive figure of the Walking Man I from the sixties, the culmination of a life and a career of absolute dedication to his work.

The exhibition also includes a remarkable selection of Giacometti&rsquo";“s prints and drawings, which focus on the modes of representation of the artist&rsquo”;"s studio and models, and a series of works that bear witness to his appreciation of the art of other cultures, notably those of Africa and Oceania.

The exhibition is curated by art historian Véronique Wiesinger, director of the Fondation Alberto et Annette Giacometti in Paris and one of the world&rsquo";“s foremost experts on the artist&rsquo”;"s work, in collaboration with José Lebrero Stals, artistic director of the Museo Picasso Málaga.

RESIN COPIES, SEMINARS AND OTHER PARALLEL ACTIVITIES As a complement to the Giacometti retrospective, six resin copies produced by the Fondation Alberto et Annette Giacometti, for the sole purpose of this exhibition at Museo Picasso Malaga, will be put on display for the very first time. A series of visits has been organized in collaboration with the ONCE (the Spanish organization for the blind), so that the visually impaired and the general public alike can discover the Swiss artist&rsquo";"s work and his creative skill.

A programme of activities has been designed around these replicas, along with a discovery area entitled A Journey Using Your Hands: Exploring Sculptures by Alberto Giacometti. Both will provide visitors an insight into to the passion and commitment that, for Giacometti, were inherent to art practice and which he himself defined as &ldquo";“the most extraordinary adventure&rdquo”;".

The Museo Picasso Malaga has also organized a seminar, Architects, Filmmakers and Artists in their Studios. This series of talks will deal with the subject of the artist&rsquo";“s studio, and examine its importance as a creative and experimental space. Luis Puelles, professor of Theory and Aesthetics at the University of Malaga, José Ramón Moreno, director of the University or Malaga School of Architecture, and Luciano Berriatúa, from Paris VIII University, will offer an initial approach to, and general contextualization of the subject from the point of view of the visual artist, the architect and the film-maker. The talks will take place on 19/10, 26/10 and 2/11, respectively, at 7.30pm. Entrance is free until all seats are taken. This activity is part of the programme Picasso 20 Gazes. Malaga, 20 Years Under Picasso&rsquo”;"s Gaze, which has been organized in collaboration with the University of Malaga.

The exceptional collaboration between Museo Picasso Málaga and the Musée Rodin and the Fondation Alberto et Annette Giacometti in Paris has led to the organization of a seminar entitled The Artist&rsquo";“s Studio, which will be held jointly in Malaga and Paris. On 27 January 2012, a conference will be held in Paris in which experts will discuss the sociological, historical and artistic implications of the artist in his or her studio. In Malaga, on 1 and 2 February 2012, the artist&rsquo”;"s studio will be examined from the point of view of architecture and its social and economic role.

The work of Alberto Giacometti will also be the main subject of Gallery Talks, the guided tours held at MPM every Thursday at 6.00pm. In order to take part, visitors simply need to register at the Museum ticket office, as the tour is free with the price of admission. Other activities, such as guided tours and workshop visits for schoolchildren and Christmas workshops for children and adolescents, have also been scheduled over the next few months at MPM. 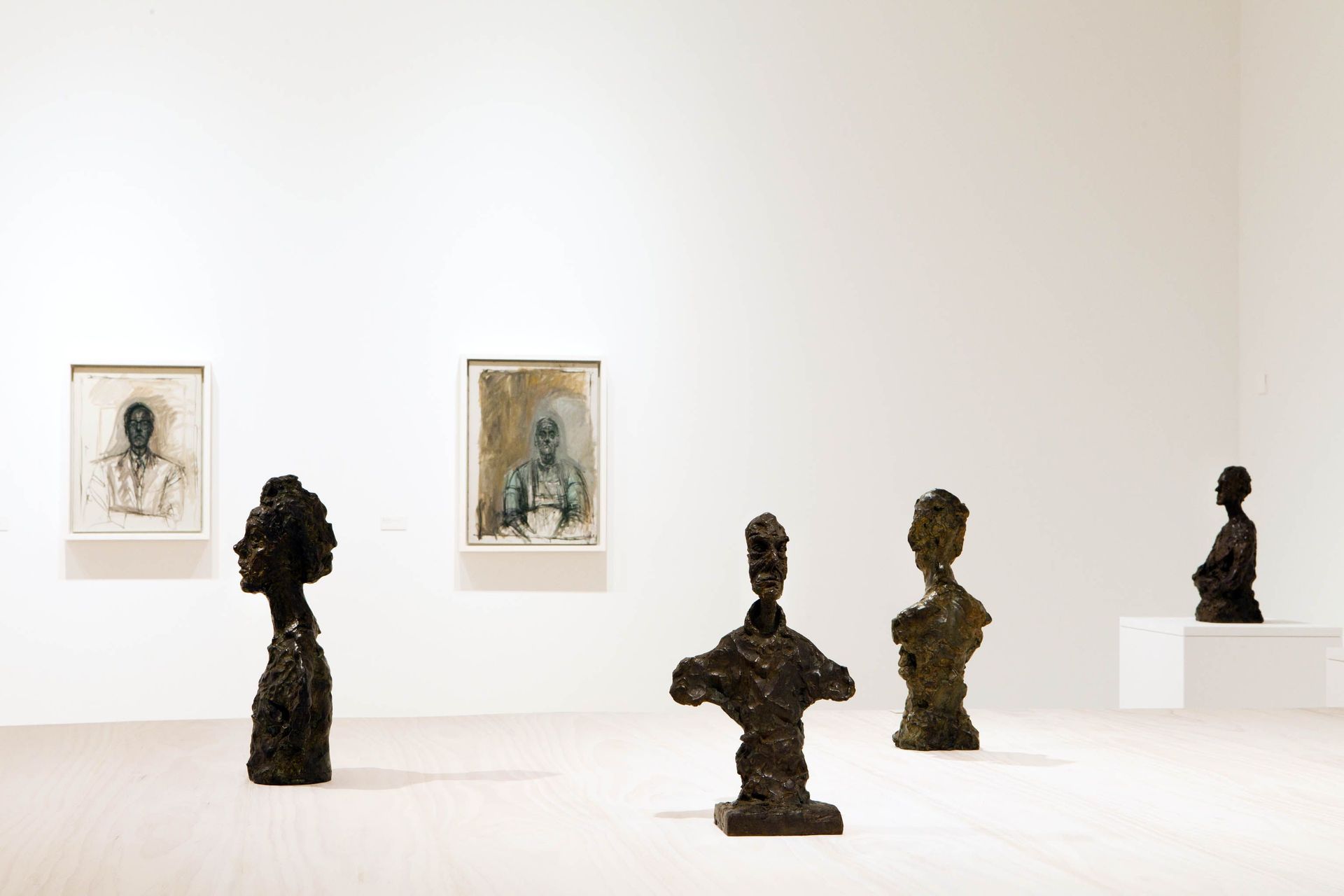