El Lissitzky. The experience of totality

Museo Picasso Málaga presents ‘El Lissitzky.The Experience of Totality’, an exhibition that brings together work by one ofthe most influential and experimental artists of the Avant-garde, and whose last exhibition in Spain was held fourteen years ago.

In a world that was changing, the career of this architect, painter, graphic designer, exhibition designer and photographer began with his early illustrations at the start of the 20th century. It passed through Avant-garde experimentation and ended with his work for the Soviet Union.

A copy of Lissitzky&rsquo";“s Prounenraum, which was created in 1923 for the Greater Berlin Art Exhibition, has been set up in Museo Picasso Málaga for the occasion. Over 130 paintings, photographs, illustrated books, magazines, films and architectural designs make up the exhibition, which is curated by Oliva María Rubio and co-produced by Museo Picasso Málaga, alongside MART Museo d&rsquo”;"artemoderna e contemporánea di Trento e Rovereto, Fundació Catalunya-La Pedrera, Barcelona and La Fábrica, Madrid.

El Lissitzky (Eliezer MarkovichLissitzky, Russia 1890-1941), was one of the most influential, experimental and controversial artists of the period between two world wars. Lissitzky approached art as a response to the demands of his time - a time of crisis, profound change, and of faith in industry and revolution. He did it by breakingdown the boundaries between disciplines and by linking visual art, architecture and design.

Borninto a middle-class Jewish family, this architect, painter, graphic designer, exhibition designer and photographer worked with the Soviets afterthe 1917 October Revolution, with European Avant-garde art in the 1920s, and as a propagandist for Stalin&rsquo";"s regime in the 1930s until his death in 1941. Lissitzky contributed to the development of Suprematism, alongside Kazimir Malevich, and with Constructivism after that. El Lissitzky invented his own form of artistic expression, which he named Proun, and his work made strong connections outside Russia, both with the De Stijl group in The Netherlands, and in the teachings of the Bauhausin Germany.

The curator of the exhibition, Oliva María Rubio, shows us a multi-disciplinary Lissitzky, for whom work and art were inextricably united, an artist who used all sorts of media to create art that, &ldquo";“blends countries and cultures”;" art, architecture and design";" Eastand West&rdquo";".

The Revolutionary After the October Revolution in 1917, he was invited by artist Marc Chagall to give lessons at the People&rsquo";“s Art School in Vítebsk. There, alongside his pupils and the Suprematist collective UNOVIS, he got involved in all kinds of protest activities, supporting the revolutionary army with propaganda posters which they placed in trams and on buildings. During these early years of the revolution, new art enjoyed official support, the idea being to eradicate bourgeois art, which was considered decorative and elitist, and to strengthen the new, proletarian, culture. El Lissitzky, like the driving force behind Supermatism, Kazimir Malevich, had a social and collective idea of art, and he was instrumental in creatingpublic awareness about the new regime&acute”;"s ideology, with a new abstract and geometric artistic language.

From 1921 onwards, he travelled continuously between the USSR and Europe, particularly to Germany, where he had acquired a degree in architectural engineering in 1914. He promoted Soviet art and ideas, while, in turn, picking up the newest trends and ideas in Western culture. He met and worked with famous names in the art world and with leading avant-garde artists: Albert Gideon Brinkmann, Ludwig Mies van der Rohe, Le Corbusier, Raoul Hausmann, Hannah H&ouml";"ch, Hans Arp, Theo van Doesburg, László Moholy-Nagy, etc. On his trips to Europe, El Lissitzky organized exhibitions, gave talks, designed covers of magazines such as Broom and Wendingen, illustrated books and made his own work known.

The artist Lissitzky was an active member of several artistic groups, and Constructivism was strongly ingrained in him. He developed his own concept with paintings, engravings and drawings that he called Proun, which stood for Projects for the Affirmation of the New, and which were conceived as a meeting point for painting and architecture. Comprising two- and three-dimensional geometric elements, they were often axonometric representations, with projections on various axes, and they challenged both spatial relationships and gravity. Lissitzky&rsquo";"s Proun work also served as his inspiration for designing buildings, costumes, machinery and stage sets.

A copy of Lissitzky&rsquo";“s Prounenraum, which was created in 1923 for the Greater Berlin Art Exhibition, has been reconstructed in Museo Picasso Málaga for this exhibition. The project transferred his experiments in painting into 3-D,and merged them with his studies in architecture. The space measures 3.20m x3.64m x 3.64m, and it is the three-dimensional expression of the of the Prounen spatial concept. The Prounenraum offers visitors a visual experience in which they can actively participate, as it synthesizes thequest for what the Utopian Avant-garde movements of the 1920s called &ldquo”;“the experience of totality&rdquo”;", in which art and life are one.

The builder In the 1920s, after meeting numerous European avant-garde artists in Germany, in particular Dadaists and members of the De Stilj group, El Lissitzky became interested in photography. He experimented with and created multiple compositions, concentrating on projects that combined photography and architecture. In a letter dated 1924 to his wife, Sophie K&uuml";“ppers, he stated: &ldquo”;“the painting has collapsed, along with the old world that created it. The new world will not need pretty pictures. If it requires a mirror, there is photography and film&rdquo”;".

During his period of convalescence in Switzerland in 1924, in an attempt to recover from tuberculosis, his interest in photography grew. His multiple portraits of Hans Arp and Kurt Schwitters date from this period, as do several photomontages, publicity shots and his famous self-portrait, The Builder which, after it was published on the cover of Foto-Auge magazine, became the symbol of 1920s art. The image of his hand holding a compass over his eyes is a metaphor for modern creativity: a combination of technology and intellect. Lissitzky&acute";"s Avant-garde photography comprised a wide range techniques and procedures: he used combination prints and experimented with cyanotypes, photographs and photomontages, which he used in different areas such as publicity, posters, books and buildings.

After returning to Moscow in 1925, he threw himself into his real passion: architecture. He submitted designs to various competitions and designed projects such as the Wolkenb&uuml";"gel, a horizontal skyscraper that was a contradiction to the vertical structures that prevailed at the time. Although none of his architectural designs were ever built, he embarked upon a wide variety of parallel projects, ranging from urban planning and furniture design to exhibition and set design. Between 1927 and 1930 he designed pavilions formajor exhibitions inside and outside the Soviet Union,in which he was able to combine his main interests: architecture, typography, narration and movement.

The typographer Lissitzky is considered the forefather of modern typography and his work in this field was decisive and important. He was involved in the Russian national movement for the revival of Jewish culture, and his earliest works were illustrations for books in Yiddish. He designed books and magazines throughout his career, becoming one of the pioneers of modern book design. His typographical compositions often feature initial letters, and he used moveable types and typefaces that were easily available.

During the last ten years of his life he became involved in promoting the achievements of the Soviet modernization process with his propaganda posters. Between 1930 and his death in 1941, El Lissitzky designed a number of publications for the Soviet state. These included his work for the magazine USSR in Construction. His wife, art historian and artist Sophie K&uuml";“ppers, actively collaborated with him during this new phase. The magazine was one of the principal media for showcasing the kind of progress that improved the USSR&rsquo”;“s image both at home and abroad, in particular with anything to do with industrialization. Initially published in five languages, including Spanish, each issue was devoted to a specific theme, chosen by a publishing committee composed of writers, photographers and designers. In the seventeen issues that El Lissitzky designed &ndash”;" some of which can be seen at Museo Picasso Málaga&ndash";“he used all sorts of techniques to enhance the propagandistic nature of the magazine. It usually featured circular cut-outs, diagonal layouts and layering, foldout pages and half-pages that broke up the rhythm of reading. His photomontages, strips dividing sections and juxtaposed images, along with his use of different types of paper, bold type and large-sized lettering, are all part of the epic, narrative and visual language that make up El Lissitzky&rsquo”;"s graphic and typographic legacy.

Catalogue and seminar The catalogue, published in Spanish, English, Italian and Catalan, is jointly published by the four institutions that have organized the exhibition: Museo Picasso Málaga, MART, Fundació Catalunya-La Pedrera and La Fábrica. The 200-page hardback book is copiously illustrated and contains pictures of the works on display, as well as articles by Olivia María Rubio, the exhibition curator and artistic director of La Fabrica";" José Lebrero Stals, artistic director of MPM";" Valery Dymshits, professor at the European University of St. Petersburg";" Víctor Margolín, professor at the University of Illinois";" and Isabel Tejeda Martín, professor at the University of Murcia.It also contains some of the correspondence between El Lissitzky and Theo van Doesburg and Le Corbusier, amongst other famous artists.

In a series of talks taking place to coincide with the opening of the exhibition, experts and researchers will be discussing the historical, social, political, economic and cultural context in which Lissitzky evolved, the development of his multi- and cross-disciplinary work, and its influence on the art produced by his contemporaries. 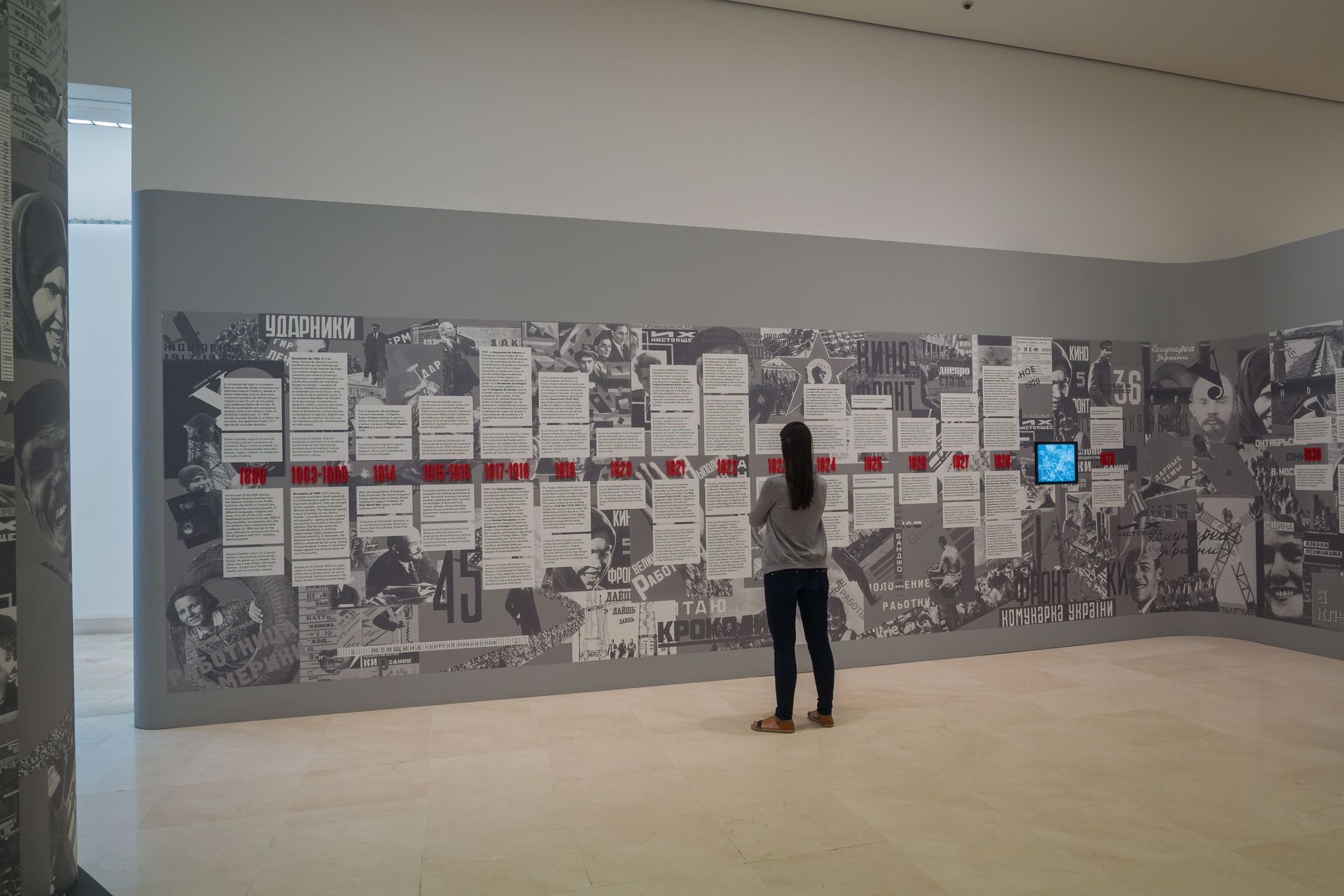 The Experience of Totality