Museo Picasso Málaga presents the exhibition 'Louise Bourgeois. I Have Been to Hell and Back'

From 10th June to 27th September 2015, Museo Picasso Málaga will be exhibiting the complex and fascinating work of Louise Bourgeois (1911-2010), one of the most influential artists of the 20th century.

It is the largest retrospective of Bourgeois’ work organized in Spain to date, with over 100 artworks spanning over seven decades, one third of which have never been shown before.

For the occasion, one of Louise Bourgeois’ most well-known sculptures, Spider (1996), has been installed in the courtyard of the Palacio de Buenavista, which houses the MPM collection.

Louise Bourgeois was born in Paris in 1911, into a well-to-do family that ran a workshop that restored medieval and Renaissance tapestries. In 1938, she moved to the United States, where she was to live for the rest of her life. A member of the American Abstract Artists Group, she achieved critical acclaim and commercial success at the age of 71, following the retrospective organized by MoMA in 1982. Her original and complex oeuvre is both diverse and fascinating, examining memory, sexuality, motherhood, human relationships and the quest for balance.

Louise Bourgeois’ career coincided with that of Pablo Picasso in a number of ways: they both produced most of their artistic work in a country other than their own";" innovation and experimentation were constant features of their lengthy artistic careers, and their respective oeuvres have served as referents for subsequent generations of artists.

“FOR ME, SCULPTURE IS THE BODY. MY BODY IS MY SCULPTURE” L.B. Bourgeois worked with all genres to create her unique, lyrical and radical works: sculpture, drawing, painting, and installation art. She devised sculptures in various formats, produced evocative drawings and engravings, and built unsettling installations. In a world where women were considered second-class artists, Bourgeois’ work acquired iconic status";" so much so that she is considered the most important female artist of our time.

After the wooden sculptures she produced in the 1940s, Louise Bourgeois began to experiment with the representation of fragments of the human body. But it was her famous bronze spiders that brought her international fame. So, for this exhibition her sculpture Spider (1996), will be installed at MPM. It is almost 8 metres in diameter and over 3m high. This was how the artist depicted her own mother: as an enormous arachnid, patient, protective and endlessly weaving – in direct reference to her mother’s job at the family’s tapestry restoration firm.

“I HAVE BEEN TO HELL AND BACK. AND, LET ME TELL YOU, IT WAS WONDERFUL” L.B. The MPM retrospective will show 101 works by Louise Bourgeois, produced between the 1940s and 2009. Forty-six sculptures in bronze, textiles, latex and aluminium, one cell and one painting, will be shown alongside 53 works on paper and fabric, many of which are large-format or produced in series. The works selected for this exhibition cover the complex variety of Bourgeois’ work, and are divided into nine sections: The Runaway Girl, Loneliness, Trauma, Fragility, Natural Studies, Eternal Movement, Relationships, Taking and Giving, and Balance. Curated by Müller-Westermann and organized alongside Moderna Museet, the exhibition brings together over 100 artworks produced over seven decades, one third of which have never been shown before.

As a prelude to the exhibition, visitors will be able to see Louise Bourgeois: Photo Album, which takes a look at the artist’s life in photographs. There will also be a screening of the documentary directed by Nigel Finch in 1994 for the BBC, Louise Bourgeois: No Trespassing, and a video produced by Museo Picasso Málaga containing interviews with Jerry Gorovoy, chairman the Louise Bourgeois Foundation, The Easton Foundation, New York";" the exhibition’s curator, Iris Müller-Westermann";" and the artistic director of MPM, José Lebrero Stals.

The catalogue is richly illustrated and published in English. A selection of the written contents have been translated in to Spanish and can be downloaded from the MPM website. A 32-page booklet in both Spanish and English has also been published for visitors, explaining the various areas into which the exhibition has been divided. It also contains a brief biography of the artist. Following the exhibitions Sophie Tauber-Arp. Avant-garde Pathways (October 2009-January 2010) and Hilma af Klint. Pioneer of Abstract (October 2013-February 2014), Museo Picasso Málaga is once again running a retrospective that showcases the work of the women artists in art history.

Special thanks to Hauser &“;” Wirth Sponsored by Caixabank In collaboration with Institut Français in Spain

To coincide with the public opening of the exhibition, MPM will be holding a seminar in which experts will discuss the artist, her work, and the importance of female artists in Spain since the 1950s.

On Thursday 11th June, the curator of the exhibition, Iris Müller-Westermann, will give the opening talk, Louise Bourgeois. I’ve Been to Hell and Back. She will be followed by Marie-Laure Bernadac, honorary general conservator of the Musée du Louvre, with the talk Louise Bourgeois. Sculpting her Life, organized in collaboration with the Institut Français in Spain. On Friday 12th June, there will be a round table discussion with Rocío de la Villa, professor of Aesthetics and Art Theory at the Universidad Autónoma de Madrid";" Isabel Hurley, director of Galería Isabel Hurley, Málaga";" artist Concha Jerez";" and Patricia Mayayo, professor of Art History at the Universidad Autónoma de Madrid . They will be discussing The Role of the Female Artist in Spain since the 1950s. Both the talks and the round-table will take place at 7.00pm in the MPM Auditorium.

At one of the most important dates on the international art market calendar, the Swiss art fair Art Basel, a round-table discussion will be held featuring Jerry Gorovoy, chairman of the Louise Bourgeois foundation, The Easton Foundation, New York";" the exhibition’s curator, Iris Müller-Westermann";" and Ulf Küster, curator of the Fondation Beyeler, Riehen. The talk will be moderated by MPM’s artistic director, José Lebrero Stals.

A series of activities have been set up around the sewn, knitted and woven works created by Louise Bourgeois, and with these handicrafts as their central theme. There will be adult workshops, in collaboration with Fabric, where participants can create pieces inspired by the works in the exhibition. Visitors will also be able to take part in an ongoing collective project that will be produced throughout the exhibition.

One Saturday a month, for the duration of the exhibition, “bees” will be held in different areas of the museum in which participants can sew, weave and knit together. In collaboration with Málaga Knits.

Balance, loneliness, fragility, receiving, human relationships, giving… We look at some of the works that feature in the exhibition, thinking about them and discussing them along with other issues present in the work of Louise Bourgeois.

SPECIAL DAYS 27th June 26th September Two days set aside for examining the life and work of Louise Bourgeois from different angles, with activities available for all types of visitors, and with the help of invited experts, so as to get to know more about the artist’s work. The 27th June celebration will conclude with a concert by Christina Rosenvinge offered in the MPM Auditorium at 9pm. Rosenvinge will perform songs from her latest album Lo Nuestro, which has in part been inspired by the work of Louise Bourgeois.

To a large extent, the works on display in this exhibition are materializations of thoughts, dreams, emotions and memories. A wide range of techniques and materials were employed to do this, many of which are innovative. These adult workshops are a place to practice artistic techniques such as water-colour, ink, etching, carving and latex casting. We can create our own artworks, based on the inspiration found in the exhibition rooms and reflecting upon the universal themes Bourgeois’ work touched upon.

These summer workshops will focus on the different ways Picasso and Bourgeois thought about and practiced painting and sculpture. Focussing on these two genres, we will look at a different technique each day. Like the two artists, we will work on experimentation with mixed techniques, the use of traditional and non-traditional materials, and simultaneous artistic languages.

Getting to know Louise Bourgeois. An activity for the whole family to do together. Explore some of the questions about the artist, as well as her works.

More information and images at comunicacion@mpicassom.org 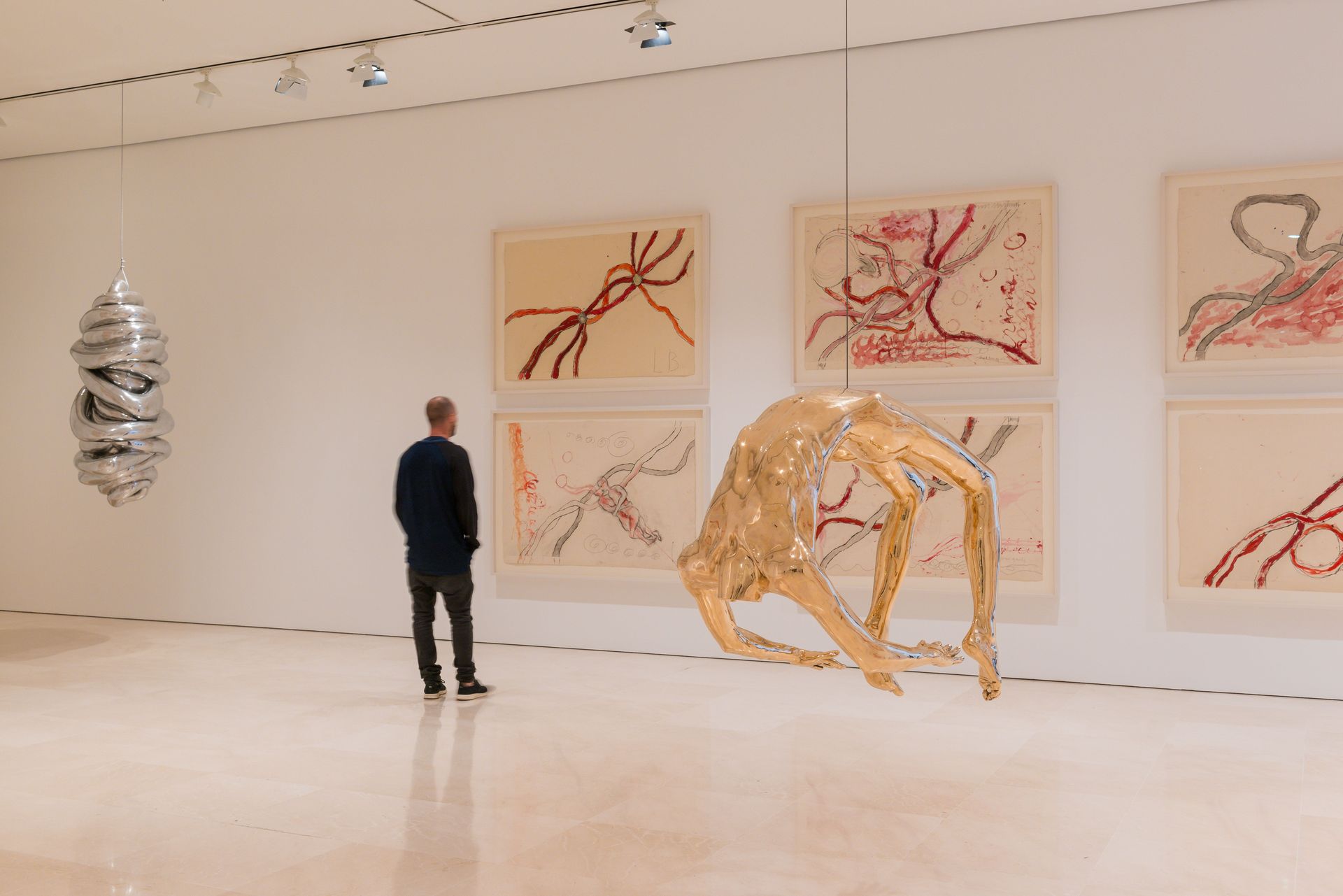 I Have Been to Hell and Back