Museo Picasso Málaga opened its doors ten years ago in an attempt to fulfil the artist’s wish of exhibiting his work in the city where he was born, in 1881. The initial idea for the Museum emerged in 1953, in the correspondence between Pablo Picasso and Juan Temboury &Aacute";"lvarez, provincial delegate of Fine Arts in Malaga. This first initiative, however, was unsuccessful. Christine Ruiz-Picasso, widow of Paul Ruiz-Picasso, eldest son of the artist, resumed contact with Malaga in 1992 on the occasion of the exhibition Classic Picasso and in 1994 with the exhibition Picasso, first glance. In 1996, the Junta de Andalucía took on the initial project from 1953 and helped to make it become reality 50 years later on October 27th, 2003 with the opening of Museo Picasso Málaga, inaugurated by King Juan Carlos I and Queen Sofia.

The creation of Museo Picasso Málaga was fruit of the will shared by Christine and Bernard Ruiz-Picasso, daughter in law and grandson of the artist, whose donations constituted the core of the Museum’s catalogue, and the Junta de Andalucía, who produced an great project for the Museum devoted to an artist whose techniques and styles changed the course of modern art. From the day it opened, ten years ago this October 2013, over 3,550,000 people of all nationalities and ages have visited the Museum.

TAKING ROOT AND GOING GLOBAL Since its inauguration, Museo Picasso Málaga has developed in two directions. On one hand, it has consolidated its international vocation, but equally important is the work done to cement its Andalusian identity. The Museum has done great PR work within its social surroundings and created links with all kinds of associations in Malaga and all of Andalusia. Some examples are the Association of Plastic Artists in Malaga, the National Organisation of the Blind (ONCE), the Fundación Secretariado Gitano (Gypsy Secretariat), etc&hellip";" as well as associations of tourist guides, hotels and tourism offices in all of Andalusia. Institutions such as the Centro Andaluz de las Letras, the Málaga Film Festival, Malaga’s Philarmonic Orquestra, the University of Málaga or Cánovas Theatre, among others, have also responded to collaboration projects for different educational and cultural activities.

Since its inauguration, the Museum has won several awards, with two prizes that stand out among the rest: the prize awarded to architect Richard Gluckmann in the 2005 edition of the American Institute of Architects’ Design Awards, for the way in which he conceived and integrated the Museum in the city of Malaga, and the prize awarded by the Ministry of Culture to the Best Published Art Book in 2010 for the edition of Avant-garde Playthings. Also noteworthy is the enormous interest attracted by the Museum in Spanish and international media, with very positive reviews of its exhibitions and cultural activities in specialised media.

A UNIQUE COLLECTION AND THIRTY-SIX TEMPORARY EXHIBITIONS The attraction felt by visitors towards the permanent collection in the Museo Picasso Málaga can be explained in that it brings together eight decades of work by Pablo Picasso, condensing and conveying the creative talent of an essential artist in understanding the history of Western Art. Museo Picasso Málaga’s permanent Collection is made up of 233 works of art and 43 works by Pablo Picasso on gratuitous loan from the Fundación Almine y Bernard Ruiz-Picasso (FABA). Oil paintings, drawings, ceramics and engravings by the artist from Malaga can be enjoyed in the eleven halls of Buenavista Palace, the Renaissance building that houses the institution, selected for their relevance in addressing subjects and themes that constitute significant aspects of Pablo Picasso’s artistic legacy: his relationship with Malaga, the versatile nature of his creative talent, his sensitivity towards inequality, the importance in his work of his intimate circle of friends and family, and his everyday life. Similarly, the Collection also reflects his historical significance as the creator of cubism and inventor of images that synthesise various formal and conceptual perspectives. He had a unique approach towards classical themes in the history of painting such as portrait, still life, landscape, and the nude, and a deep relationship of respect, inspiration and antagonism with the great masters.

MPM also holds two Picasso paintings deposited in 2007 by the Ministry of Culture and an engraving from the Varez Fisa Collection.

The 36 temporary exhibitions that Museo Picasso Málaga has organised in these past ten years have explored different themes that underline the relationship between the avant-guard and modernism, in terms of form and content. These themes complement each other to offer the public different ways of approaching Pablo Picasso’s art, of exploring his artistic environment and reflecting on the significance of his work and its importance in later periods.

Thus, the first expositional line examines specific aspects of Picasso’s work, such that the viewer may learn and enjoy a specific facet of the artist’s prolific work. The second expositional line is intended to diffuse knowledge of the artistic context in which Pablo Picasso created his work, a fascinating period that saw the emergence of artistic movements that would lay the foundations for today’s Art and Design. The third of the Museum’s expositional lines analyses and reflects on the mark the Andalusian artist left on modern art and its protagonists. The different exhibits organised throughout this decade have enabled more than 750 works by Pablo Picasso to visit the city, works as relevant as La Celestina (1904), Portrait of Benedetta Bianco (1905), Head of Woman with Chignon (1932), La Joie de vivre (1946), The Sea Urchin eater (1946), Las Meninas (1957) and Lobster and Cat (1965)

EDUCATIONAL AND CULTURE FOR ALL One of the pillars on which Museo Picasso Málaga’s work is built is its commitment to bringing art closer to civil society. The pedagogical programmes are designed with the ultimate objective of becoming mediators between works of art and the public. This materialises through discussions and workshops that focus on the concepts behind the art and create an enriching experience of respect towards the artist’s intention while incorporating the point of view of visitors and educators, commissioners and historians. This has allowed over 300,000 people to benefit from the Museum’s activities. Of that total, more than 146,000 are school students who have taken part in over 7,000 guided visits and workshops organised for primary, secondary and high schools.

Seminars, conferences, visual arts, classical music, theatre, jazz, poetry, flamenco&hellip";" Museo Picasso Málaga has an extraordinary programme of cultural activities that offers different ways of enjoying art intended for different publics: from kids who sit in front of a stage for the first time to people who look to delve deeper into the art and thought of the 20th Century, as well as lovers of an incredible array of musical and literary art forms. All this throughout the 170 cultural activities organised, as well as the Family Days, Museum Nights, White Night festivals, and open days&hellip";" Museo Picasso Málaga has opened its doors to citizens on many occasions as a way of supplementing an artistic programme made to diffuse the work of the most universal of Malaga’s artists.

AUDIOVISUAL PRODUCTION AND PUBLISHING Over the first ten years of the Museum’s life, 38 books were published by the Museum. Most were catalogues and material on temporary exhibitions, but the Museum has also published essays and poetry. This meticulous publishing work has produced books that are special because of their graphic design and the quality of their content, both in terms of their text and images. The publications are distributed to bookshops around the globe. Precisely very close to the Museum’s bookshop, the Crommelynck printing press is on display since 2011, used by two brothers and engravers to bring to paper the designs and experiments carried out during decades by Picasso in his engraving plates and matrices.

Apart from its publishing work, the Museum is also involved in audiovisual production, an activity it plans to develop further in the years to come. An audiovisual production of almost 5’ exhibited by AENA in Spain’s most important airports in 2005, two videos directed by &Aacute";“ngeles González-Sinde in 2007 and one 13’ video filmed for the exhibition Bill Viola: Figurative Works (2010) were the first of the Museum’s productions. They were joined in 2011 by Picasso at work. Through the lens of David Douglas Duncan, a 20’ documentary made expressly for display with the exhibition”;" a 1’ trailer in 2012 on the occasion of the exhibition The Grotesque Factor, viewed in cinemas throughout Spain and, more recently, a new 16’ documentary displayed on the occasion of the exhibition Pablo Picasso. Family Album, which captured the testimonies of Christine Ruiz-Picasso, Claude Ruiz-Picasso, Fran&ccedil";"oise Gilot and John Richardson.

LIBRARY AND DOCUMENTATION CENTRE Museo Picasso Málaga’s Library has also grown during the last decade, and its collection now holds over 7,500 documents among which are important specialised publications that focus on Pablo Picasso’s life and work. It also includes books on contemporary artists, the avant-garde and figures that inspired him, as well as monographs, exhibition catalogues, catalogues raisonnées, works of reference, periodical publications and audiovisual and photographic material, and much more. The Library houses three important collections. The Bernardo Sofovich Collection, with 1,100 documents collected by this intellectual over a period of 50 years";" the Temboury Legacy, donated to MPM by the Temboury family, including Picasso’s correspondence with Jaime Sabartés";" and Roberto Otero’s photographic archive of over 2,400 photographs and negatives that make up an exceptional illustration of Pablo Picasso’s everyday life.

PROFILE OF THE MUSEUM’S VISITORS Surveys carried out among people visiting the Museum draw a full profile of our visitors. We therefore know that the average visitor of the Museum is between 31 and 50 years old, married and with children. Our typical visitor has a university degree and is employed, usually as a technical professional in middle management. 64% of our visitors live abroad and 36% are Spanish residents. Among the foreign residents, Europeans visit our Museum the most, with British citizens occupying first place on the list (15%), followed by German (12%) and French (10%) visitors. There has been a considerable increase in the number of visitors who live in Malaga (34.5%), occupying first place in our list of Spanish visitors to the Museum, and followed by visitors from Madrid (13%) and Seville (65%). Apart from the increase in visitors from Malaga during the last three years, the profiles that have grown the most are young people under 30 and senior and unemployed citizens.

THE FOUNDATION AND ITS PATRONS Museo Picasso Málaga is administered by the Fundación Museo Picasso Málaga. Legado Paul, Christine y Bernard Ruiz-Picasso, whose objective it is to conserve, exhibit, study and diffuse the work of Pablo Picasso. Museo Picasso Málaga is conceived as a nucleus that drives and inspires a cultural and social project accessible to citizens not only as a means to enjoy the artist’s heritage, but also as a way to participate in educational activities and benefit from the Museum’s cultural services.

In its tenth anniversary, Museo Picasso Málaga wishes to express its gratitude, once more, to all the institutions and companies that serve as patrons, and whose commitment to art and culture is essential for the development of the Museum’s artistic programme. The Council of Patrons, created as a structure for the social and financial support received by the Museum and to promote the integration of the greatest possible number of people, institutions and companies who wish to participate in the Museum’s funding, is made up of Radio Televisión de Andalucía, RTVA, as Advisory Partner, as well as Vocento, Grupo Joly and Malta, San Miguel, Fundación AENA and Malaga’s Provincial Council, as Patron Partners. 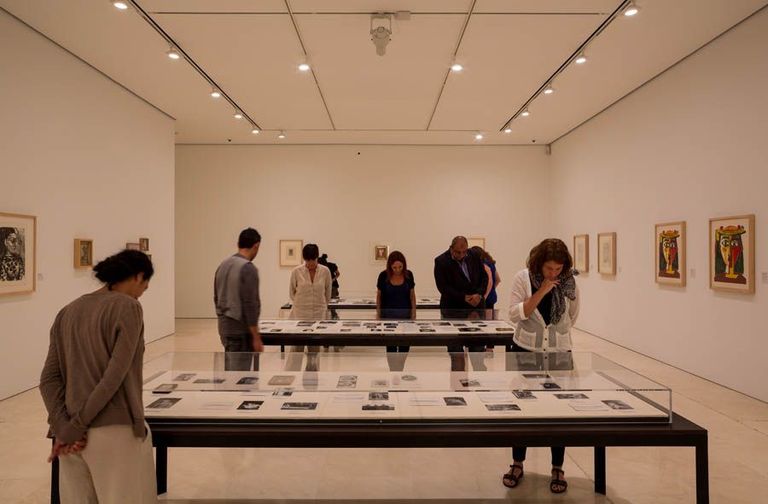