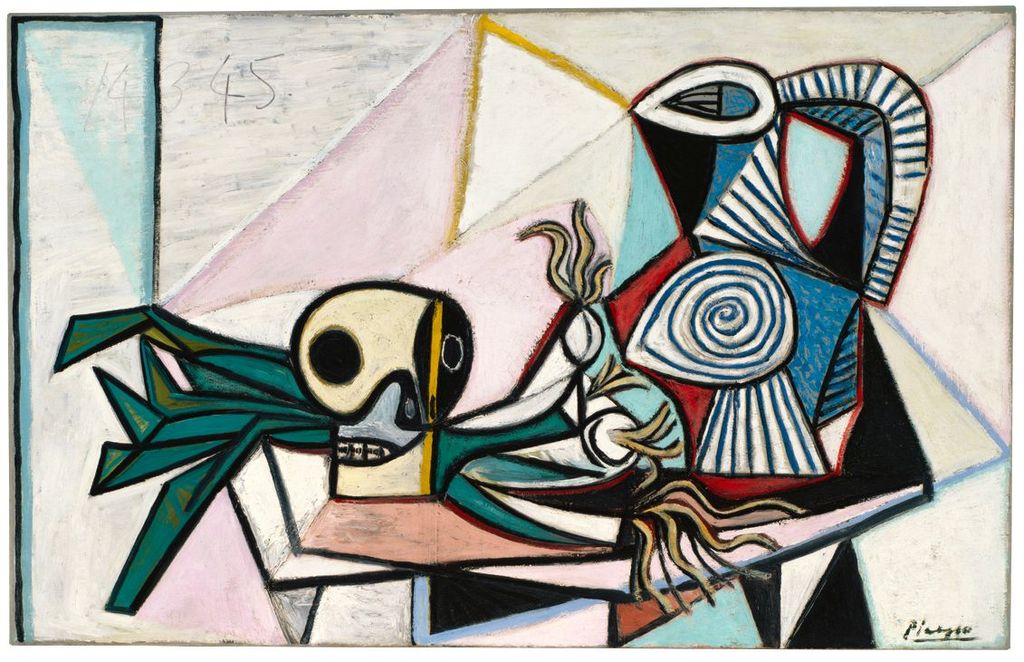 UNTIL FEBRUARY 2022, MUSEO PICASSO MÁLAGA WILL BE SHOWING THE CANVAS “STILL LIFE WITH SKULL, LEEKS AND A PITCHER”, A GUEST WORK FROM THE COLLECTION OF THE FINE ARTS MUSEUM OF SAN FRANCISCO

Skull, Leeks and a Pitcher is an oil painting from the collection of the Fine Arts Museum of San Francisco that Pablo Picasso painted in 1945. This canvas has been added to Museo Picasso Málaga’s exhibition Dialogues with Picasso. Collection 2020-2023, where it will remain until February 2022.

In this exchange between the two museums, the bronze Head of a Bull, which belongs to the Fundación Almine y Bernard Ruiz- Picasso, and is on temporary loan to Museo Picasso Málaga, has been loaned for the “Calder- Picasso” exhibition, on its tour to the Fine Arts Museum of San Francisco De Young (27th February – 23rd May 2021); the High Museum, Atlanta (26th June – 12th September 2021) and the Museum of Fine Arts in Houston (31st October 2021 – 30th January 2022).

Picasso’s still lives are, on the one hand, the object of formal experimentation, but they also reflect his private sphere and the inclinations that made up each stage of his life. Skull, Leeks and a Pitcher, the 1945 picture on temporary loan from the Fine Arts Museum of San Francisco, makes an interesting addition to Dialogues with Picasso. Collection 2020-2023.

The iconography in the work, a skull and a pitcher, come from a repertoire of significant motifs that Picasso depicted over four decades. The skull, the traditional symbol of death, appeared for the first time in Picasso’s work in 1908. As from 1925, he often replaced it with decapitated head, fresh from the butcher: a sheep, goat, calf or bull. In early 1945, when the Second World War was coming to an end, he came up with a variation, posing a skull on top of a pile of leeks. Françoise Gilot mentioned in her writings that Picasso had been working for months on a series of still lifes, all based on the same theme of a skull and some leeks on a table. When she asked, “What have the leeks got to do with the skulls?”, he replied:

“In plastic art terms, a lot. You cannot keep on painting the skull and crossbones, just as you can´t keep on rhyming “love” with “dove” [in Spanish amor/color]. So, painting these leeks reminds you of the crossbones without too much effort of the imagination, and without any crossbones being clearly shown”.

As from 1919, the pitchers also played an important part in Picasso’s iconography, along with the wineglasses and guitars he painted in earlier still lifes.

During the final years of the Second World War in particular, Picasso expressed his concerns about death in various still lifes, continuing in the artistic tradition, so typical of Spanish Golden Age paintings, of confronting the viewer with the fleeting nature of life by evoking traditional vanitas and memento mori. At first glance, Skull, Leeks and a Pitcher seem to belong to the cold, monochromatic group of wartime still lifes. But on closer inspection it reveals a rich play of colour: the large facets in the background are coated in pale shades of pink, blue and turquoise, edged with luminous bands of colour. The skull, the leeks, the pitcher and the table in the foreground are in sharper focus, outlined in black and painted in stronger colours. The pitcher is coloured red, white, and blue, the colours of the French flag.

During the time Head of a Bull will be part of the U.S. tour of the Calder-Picasso, exhibition, visitors to Museo Picasso Málaga over the next few months will be able to see this Still Life with Skull, Leeks and a Pitcher (1945) in Room 7, in the section entitled “The Anatomy of Terror”. More information on the webpage https://www.museopicassomalaga.org/en/collection/anatomy-terror-0