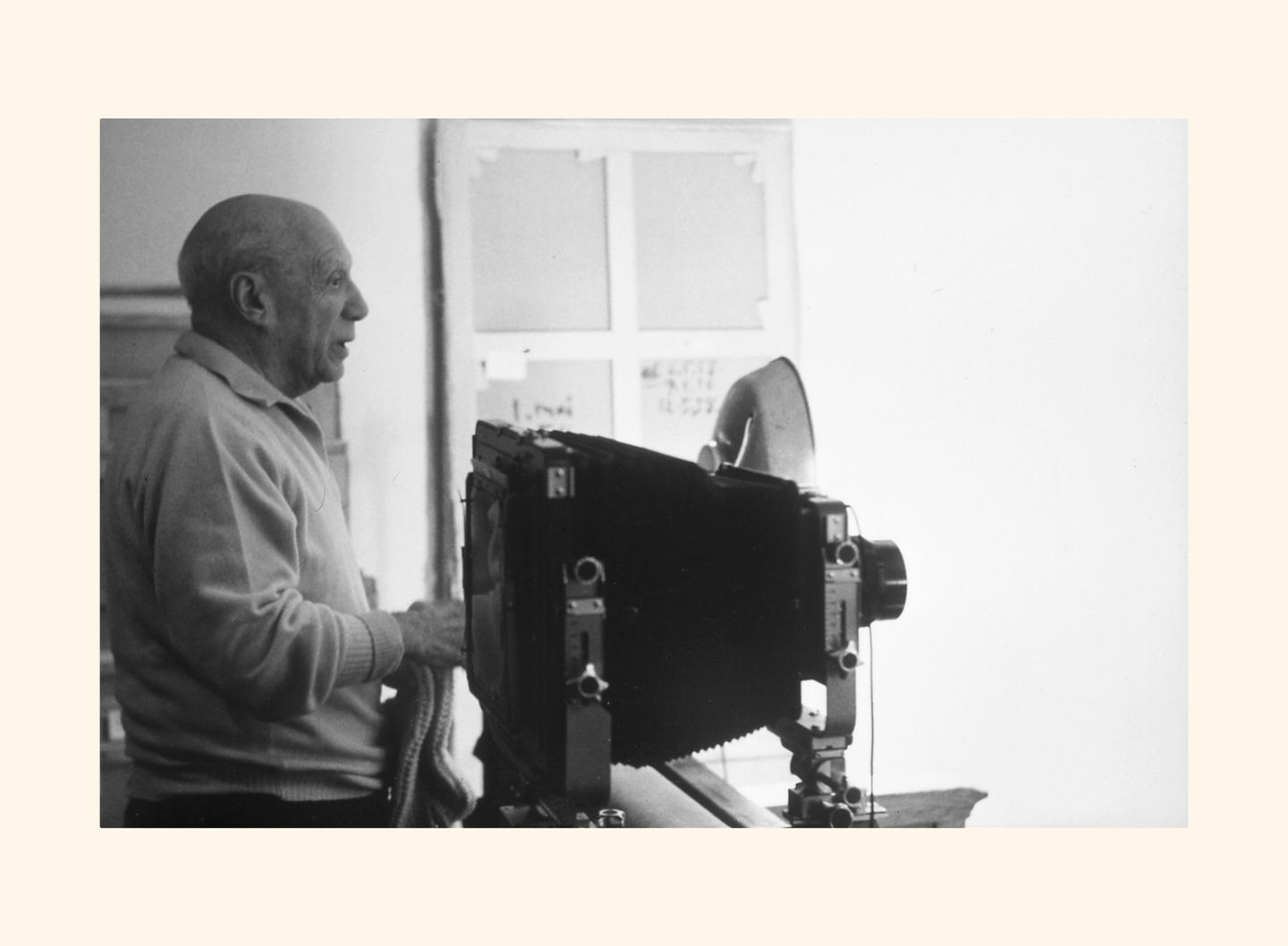 Picasso next to the camera used to take pictures of his works for the catalogue raisoné published by Christian Zervos Mougins, Notre-Dame-de-Vie, [1968-1969]

The photographs on display in this exhibition reveal Pablo Picasso going about his everyday life, whether at work on his latest exhibition of ceramics in Vallauris, selecting pieces for the Homage to Picasso retrospective, or playing host to friends and professionals in the company of his wife, Jacqueline Roque. They also illustrate the solitude the artist sought in his creative process and the artworks he lived with every day. According to José Lebrero, artistic director of the Museo Picasso Málaga, this selection is designed as ‘a short story, almost an open-ended literary narration that serves as an introduction to Pablo Picasso’s personal world’.

The Argentine journalist and photographer Roberto Otero was one of the few reporters to whom the Málaga-born painter opened the doors of his house in the south of France, allowing him to record for posterity not only his working environment in the 1960s but also many scenes from his daily life: his family, his friends and his customs. The fact is that, although many photographers approached Picasso on account of his importance as an artist, his personal charisma and his appeal as a media figure, Otero was one of a small number of personal friends who accompanied him for a time with their cameras slung over their shoulders. The section on the rapport between the painter and the poet and writer of Cádiz, Rafael Alberti, is a good example. With Alberti, another Spaniard in exile for political reasons, Picasso shared long soirées and many encounters, as well as various contributions to poetry books illustrated by both.   Picasso as Seen by Otero also features a selection of material from the Otero Photographic Archive held in the museum: handwritten notebooks in which the photographer recorded fragments of conversations he had with Pablo Picasso. Otero states in the prologue of his book of photographs and writings, Recuerdos de Picasso (Ministerio de Cultura, Dirección General de Bellas Artes y Archivos, 1984), that ‘out of hundreds of titles, there are only two books of conversations with Picasso, and both of them are by photographers, Brassaï and Otero, his only two friends who appear to have had the idea of systematically making notes of their chats with the artist’. Also on view in the exhibition is the layout of his book Lejos de España, which was brought out by Editorial Dopesa in 1975, having been published the previous year by Harry N. Abrams in New York (Forever Picasso: An Intimate Look at His Last Years), as well as other photographs by Roberto Otero shown at the Gmurzynska gallery at Art Basel in 1997.

Roberto Otero was born in Argentina in 1931 and died in Palma de Mallorca in 2004. His relationship with Picasso came about through art critic Ricardo Baeza and writer José Bergamín, as well as through his marriage to Rafael Alberti’s daughter Aitana. For ten years, chiefly between 1961 and 1970, Roberto Otero (a photographer, journalist, writer and film researcher) took hundreds of pictures of Picasso, giving rise to a huge photographic archive that was acquired by the Museo Picasso Málaga in 2005. The more than 1,500 images that make up this archive, including negatives, slides, prints on paper and internegatives, are an important documentary testament centred on the final stage in the artist’s life and the period when he moved to Notre-Dame-de-Vie, in the town of Mougins, in the south of France.   Otero’s photographic work is outstanding on several accounts. The first is unquestionably the sheer size of the archive. The second is the period on which it focuses, which is precisely a stage of which there are considerably fewer photographic testaments compared to the preceding decades, inevitably making it the most important documentary record of the last years of the artist’s life. The third is Otero’s familiarity with Picasso’s environment, a circumstance that decisively influenced the nature and development of his images. The last is Otero’s quality as a photographer, a far cry from the acknowledged ‘artistic’ status of those who preceded him in the task of recording Picasso’s life and oeuvre in pictures. However, precisely this, and his familiarity with the artist, is what is unique about the Otero archive and ultimately makes it what it is. It underpins the constancy, closeness and obsessive repetition that characterise this group of images.   Roberto Otero did not take charismatic or highly iconic photographs of Picasso. Nor is he a photographer with a recognisable style or aesthetic programme. Otero’s position and rhythm lie in the rapport that comes from closeness and in the continuity and repetition of shots. His rhythm is slow, daily, everyday and intimate. If his images as a whole can be said to resemble to an extent a family album, it is precisely because of this constant, uniform repetition of moments and emotions, places and situations. Similarly, the appearance of certain ‘transgressions’, such as the grain of the photographs, unnatural angles of view or pictures taken inadvertently, also points to a family album. The fact that Otero is not an excellent photographer who is sure of himself, that he takes his pictures with several shots, causes him to photograph the subject over and over again to ensure that he gets it right. This imbues his pictures with generosity and a very specific nature. The images thus repeat the same situations, and it is this repetition that allows for movements or montages of both real and imaginary sequences, lending his work (albeit unpremeditatedly) a constant narrativity, sequentiality and, in a certain sense, dramatic tension.

View
PublicationPicasso as seen by Otero 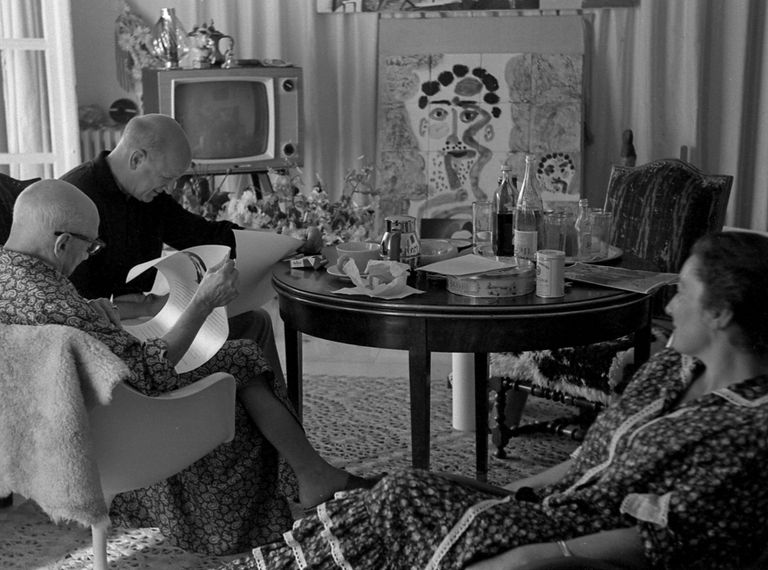 Pablo and Jacqueline Picasso with the US architect William Hartmann going over the paperwork for his sculpture project for the Chicago Civic Center, opened in 1967, Mougins, Notre-Dame-de-Vie, August, 1966 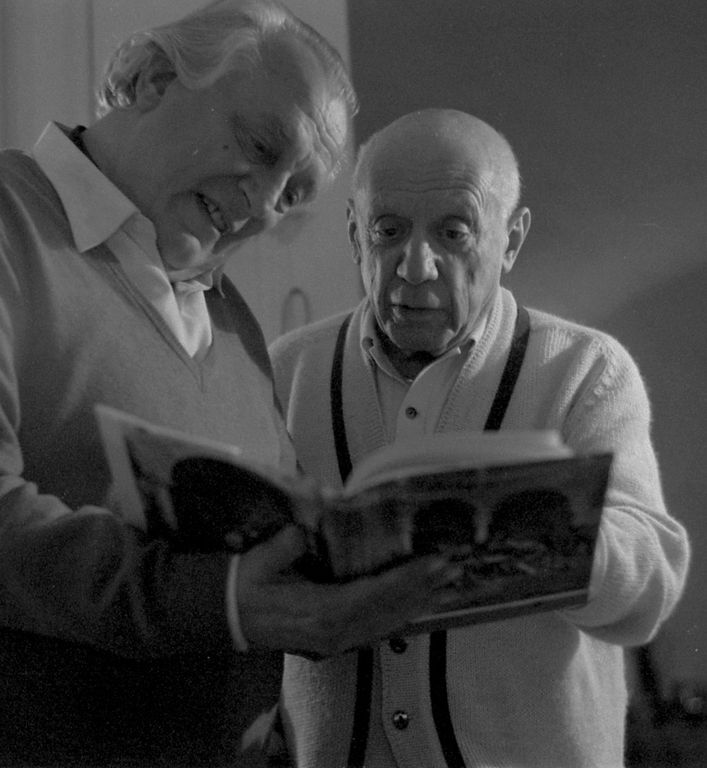 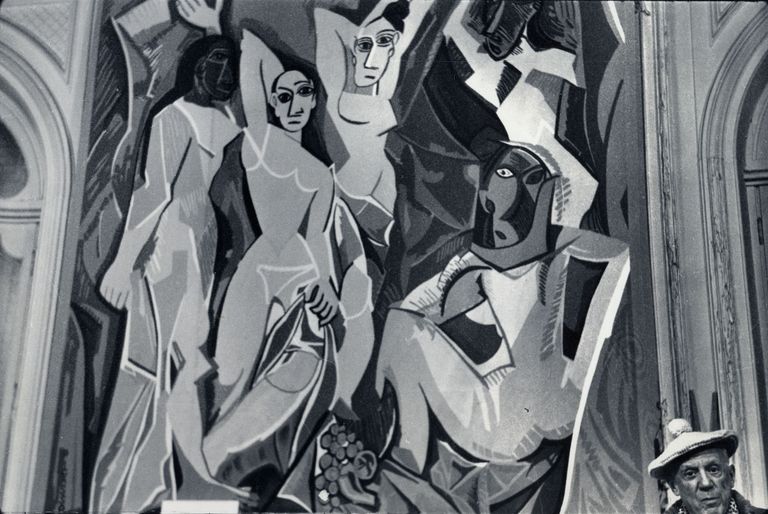 Pablo Picasso next to a tapestry made after his celebrated painting “Les Demoiselles d´Avignon” by René y Jacqueline Dürrbach in 1958, Cannes, La Californie, October 4th, 1966 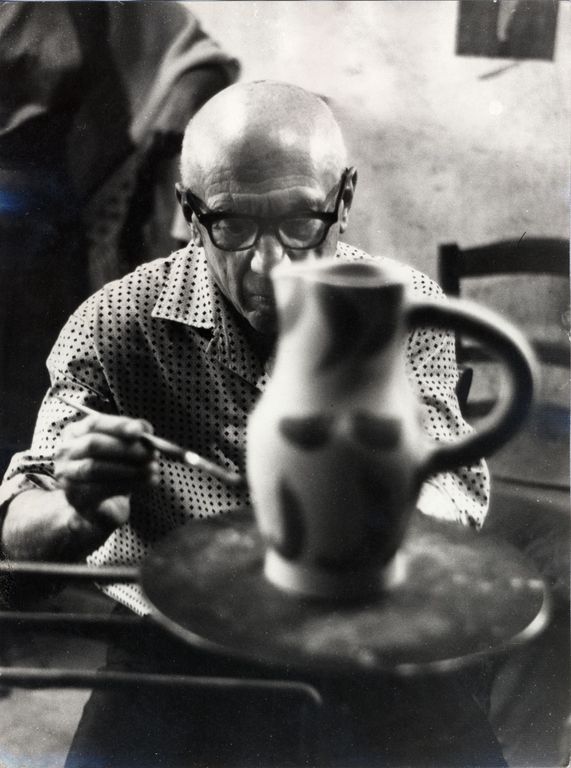